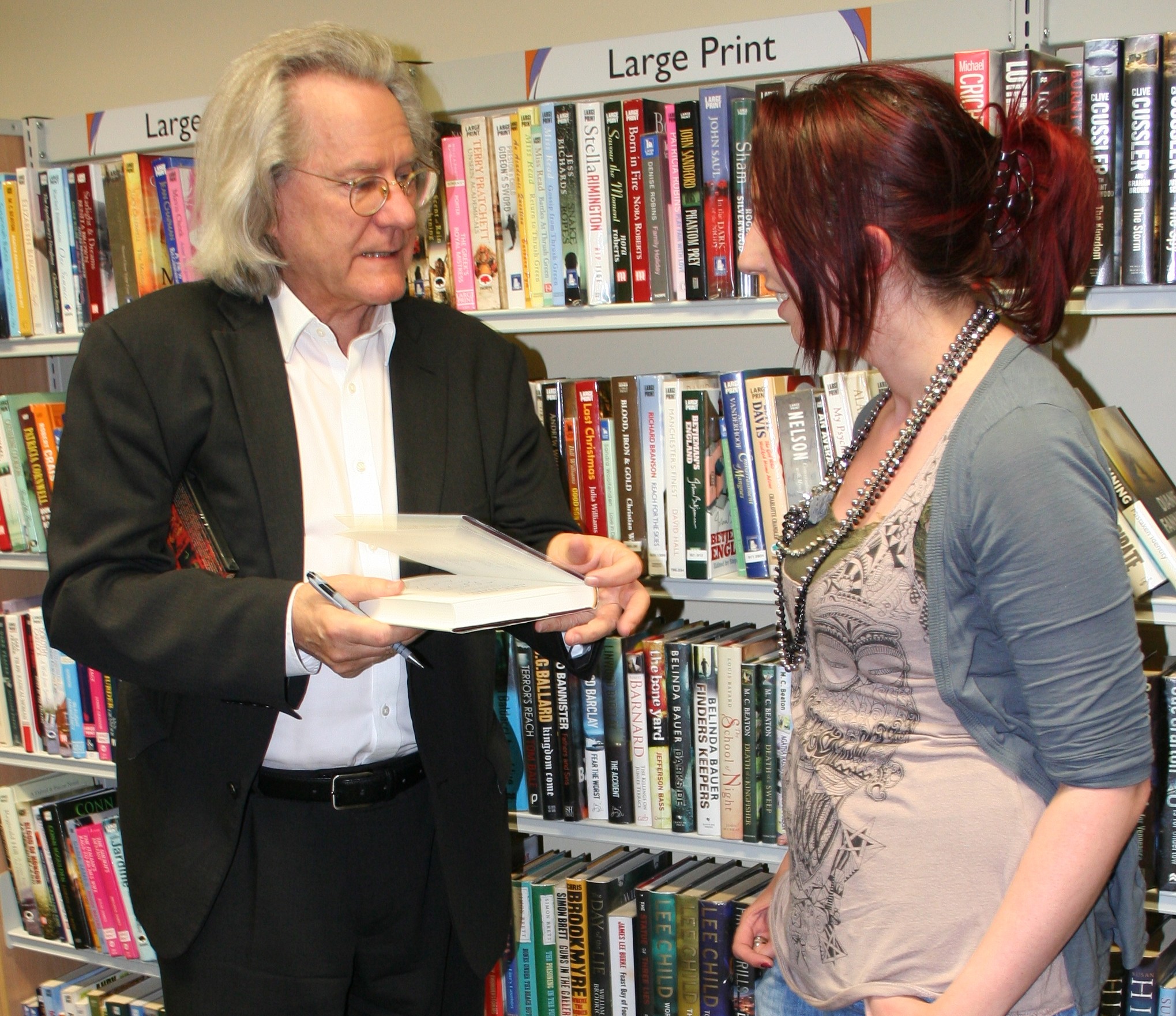 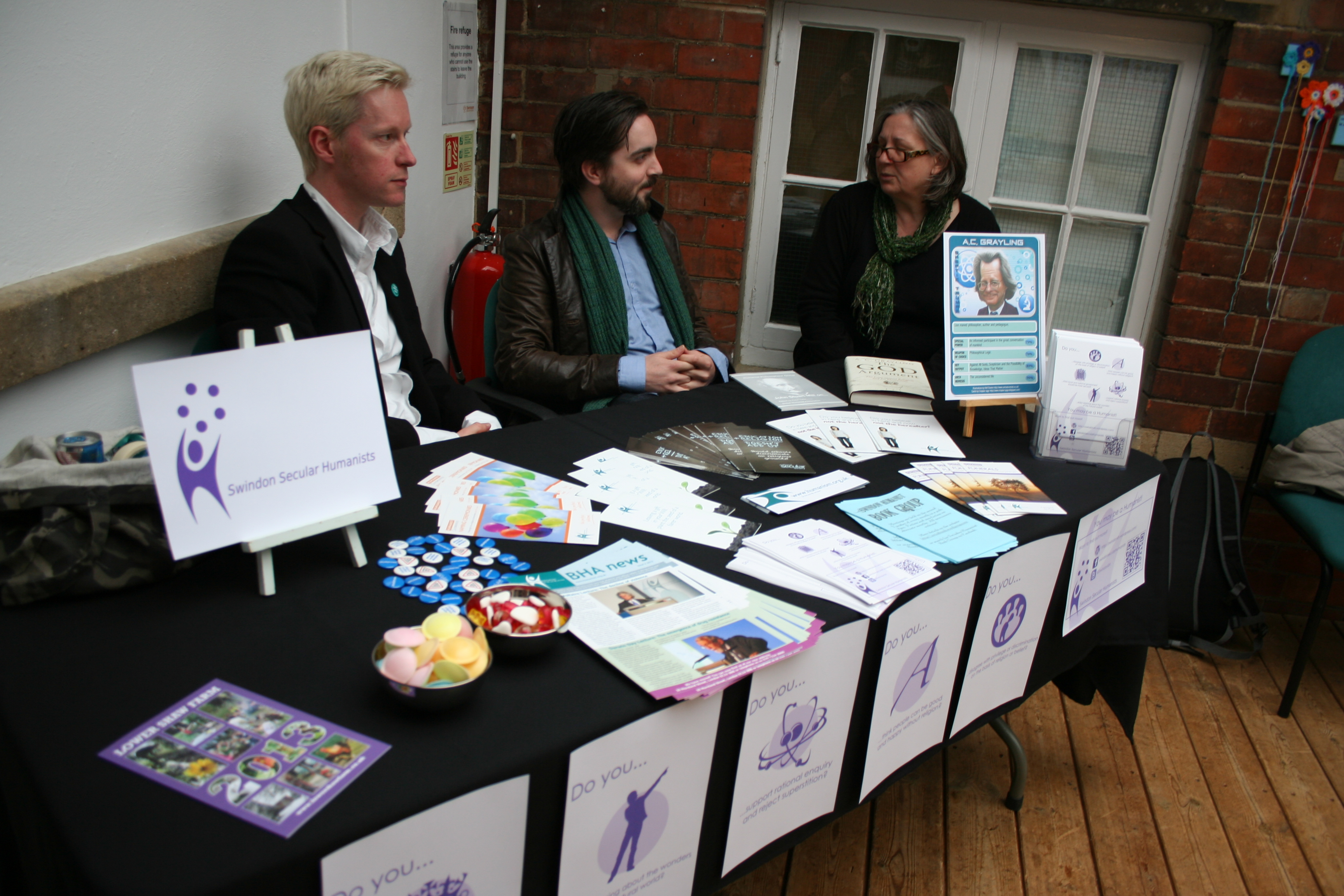 We had the great pleasure of being a part of one of the events at the Swindon Festival of Literature this year. Huge thanks to Matt Holland and everyone who organised the festival.

AC Grayling visited on Thursday 9th May to talk about his new book, The God Argument. I have myself been reading the book and he of course, signed it that evening.

Not only was the day a great opportunity to meet the man himself, but also to get the word out about the Swindon Humanists. I heard the phrase “I didn’t even know there *were* humanists in Swindon” quite a few times. We have had quite a bit of interest via this site since then and very much look forward to meeting some new people at our next group meetup (details can be found on the Meetings page)

As for Grayling, he was of course wonderful! One hour could never have been enough time for him to fully convey the message within The God Argument, although having read the first half of it i’m amazed he condensed so much into that one hour enough to get the point across.

Seeing as i have the most awful memory known to man, i will instead quote a few moments from the first half of his book, to give a little taster of what’s inside. I highly recommend it though, and i haven’t even got to the end.

One of the most impressive things for me, almost as soon as you jump into is was this:

“And indeed, everywhere that science and education have advanced, so religion has dwindled in influence. Increased liberty of thought and expression has allowed those who do not hold religious view to express their criticism openly, and religion’s traditional armour of privilege and respect has accordingly rusted away, increasingly exposing it to challenge.”

It’s nothing none of us don’t already know, only he puts it so incredibly beautifully.

Another stand-out moment of the book, and of course the evening, was when Grayling talked about Naming and Describing a ‘god’. The fact that both religious and non-religious people tend to capitalise it as a name itself seems to twist an identification to the name. Grayling goes on to mention a little thought experiment regarding the use of the word ‘God’ as a name or description.

In such sentences as ‘God created the universe’ or ;God forbids homosexual acts’, remove the word ‘God’ and substitute the name ‘Fred’ or the description ‘the supreme egg’. That name and that description are arbitrarily chosen to fill the space in sentences that ;God; occupies, in order to test how much explanatory utility lies in an undefined word or expression. Imagine someone asking, ‘How did the universe cone into existence?’ and being answered, ‘It was created by Fred’ or ‘It was created by the supreme egg’. Obviously such a response explains nothing, because it means nothing. There is no greater explanatory power or meaning if one puts ‘god’, ‘God’ or ‘the supreme being’ in place of ‘Fred’ or ‘the supreme egg’.

(This became quite the laugh that night, as one of our members is named Fred)

There is a beautiful point raised in the book and which Grayling mentioned the other evening, and i shall try and precis this without just copying large chunks out of the book!
I do hope i’m able to get the point across well enough.

The point was in regards to religious origins and the evolution of religion and deities. In the early days of civilisation, people had no real science or technology but still needed some way to explain the things they didn’t understand. As all they could know what how they, as people, affected nature and the things around them, this would have been projected onto the world around them. To the extent that the wind they felt, or the rain that fell *must* have had a cause, and by deduction using no real scientific methods, their conclusions landed them with the answer that there must be a being more powerful than them causing these things. Grayling says “…the agencies or powers that made the natural world were at first located in nature itself -water nymphs, dryads in tress, river and sea gods, thunder gods like Zeus and Thor..”

Obviously, as science, knowledge and technology grew over our own evolution, so the explanation for deities crept further and further away and up. Constantly relocating themselves to places such as mountain tops (Olympus, Sinai). When man reached the mountain and found no gods there, the further away from man they crept. Space exploration came along, we could easily see that, as the earth is a globe there is no “up” or “down” and hence heaven and hell had to recede. It has got to a point now where these deities reside outside time and space itself. “..retreating beyond the horizon of scientific knowledge as it advanced”. Ask anyone now if they believe in Zeus and they will say no. Why then, when it comes to capital G, god, should the answer be any different?

Without filling this entire blog post with quotes from the book (which i would love to do!) I will finish with something AC Grayling said the other night, that, if it is in the book, i haven’t read yet – and that is in relation to the Humanist “Golden Rule” – for those who don’t know what that is, it’s the simple phrase along the lines of “Do unto others that you would have them do unto you” – I have always thought this is a great rule to live by, but Grayling completely blew it out of the water for me, and i will leave you with the moment he quoted George Bernard Shaw and his following remark:

“…’Under no circumstances should you do to people what you would like them to do to you, because they may not like it!’… And this is a very capable insight I am not the benchmark or the standard for other people’s tastes and desires.” 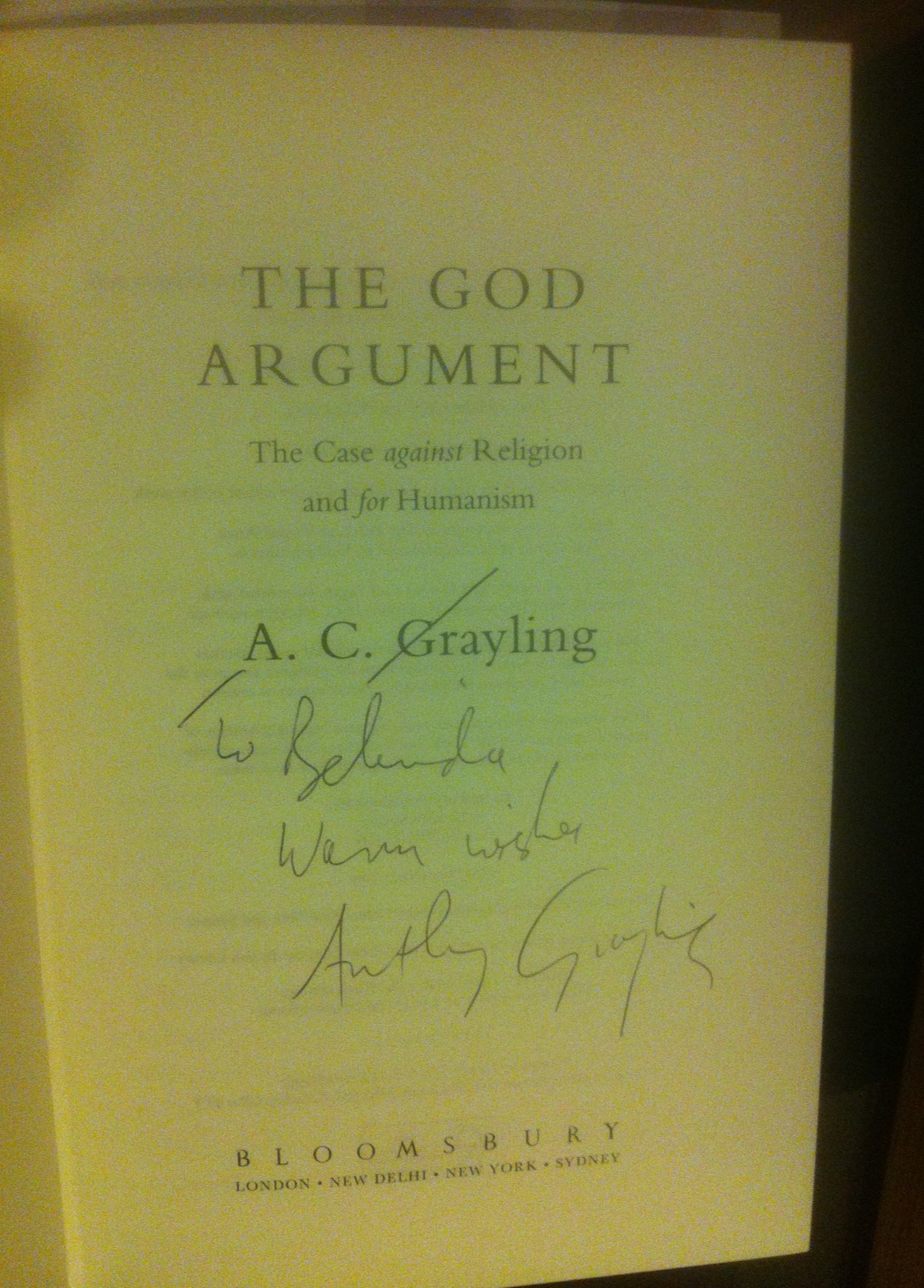 B (This became quite the laugh that night, as one of our members is named Fred)