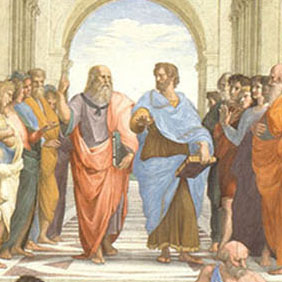 A couple of weeks ago a few of us took part in a panel discussion on humanism at a local philosophical society, representing the Swindon Humanists. I didn’t feel at all qualified to do so, but thought it would be a fun experience anyway, which indeed it was.

It was also at times very frustrating as I don’t think any of us succeeded in getting important points across very well (under some quite intense questioning admittedly). This wasn’t a surprise as I know next to nothing about philosophy and was sure in advance I’d miss references and arguments.

One question that came up (not directly about humanism) that baffled me was about materialism. I would consider myself a materialist, in the sense that I don’t believe in an immaterial aspect to reality. After the subject had been raised, the question was asked – and I hope I’m accurately reporting it – that would we not think that some things, the example used was Beethoven’s 9th symphony, had to exist in some immaterial form. I must clearly be missing some important philosophical point, because even writing that now it seems ridiculous to me. We argued that it is simply a pattern of information that can and does become encoded in all sorts of physical forms, but this didn’t seem to dissuade anyone from suggesting a requirement for some sort of ephemeral existence for the composer’s famous work.

Having thought about this for a while now I can only respond with a thought experiment and some more questions. Consider the complete timeline of Beethoven’s 9th, from the moment the composition first formed in the composer’s mind, to some imagined far-future where the Earth and humanity have long since vanished from the universe and no physical manifestation of the pattern of information that is (or was) the piece exists. So, at what point along that timeline does the symphony leave the material world and become immaterial? How and why would it do so?

This is how I imagine that timeline to look: the music begins in the composer’s mind as patterns of electrical activity across the brain, which is then encoded into written form as musical notation. I don’t know anything about musical notation (is it a language, a form of mathematical code? Both?) but I do know that it allows the music to be given to someone else to be decoded, or played by an orchestra. Now, would the first time the 9th was played aloud by a full orchestra have matched the pattern of information that first formed in the composer’s mind? Of course not. There would be many subtle differences in how the code written down in musical notation would have been interpreted by an orchestra and conductor – and the same will be true every time it is played aloud along it’s timeline. In the same way that the written code is interpreted differently when played surely every person listening to the music will experience it in a slightly different way. No one can know what anyone else’s experience of it is like. So the code moves to another form (the brain activity of others) and is replayed, reheard, recorded in countless ways, every physical version having differences. Of course it can’t mutate into something altogether different (although, it would have undoubtedly been adapted, reimagined, even plagiarised in parts during it’s timeline) because of the original musical notation version acting as… a blueprint (Template? Formula?) that anything wishing to be know as Beethoven’s 9th needs to arise from. So over time what we know as Beethoven’s 9th will have taken many different types of physical form an immeasurable number of times, until in some dim and distant future, at the end of it’s timeline, every copy will have disappeared, everyone who ever heard it will be dead, every physical manifestation of the pattern will have been lost.

Again I ask at what point did it leave the material world and how? If indeed it did, does it’s immaterial form survive the disappearance of it’s material original? Or perhaps the suggestion is that it exists eternally immaterially somehow, only to enter the physical realm via the composer? Can the immaterial form change in anyway? Do we all experience the immaterial form somehow when we hear it played? How? Why does anyone need to propose some mysterious immaterial existence to it when there would appear to me to be no need whatever to do so? As I said, I must clearly be missing some deep philosophical point somewhere along the line.

What this does remind me of is the ontological argument for god, which is basically that if we can conceive of a completely perfect being (god, of course) then a completely perfect being that actually exists is more perfect than one that doesn’t, hence god exists. If only it were that easy, eh? Perhaps the whole immaterial 9th argument is somehow proposing the existence of a perfect 9th symphony that transcends the many ever so slightly different material forms it takes over time. I don’t know, I hope not because it’s just silly, as is the ontological argument. The example I use is of a perfect circle, which we can not only conceive of but have even developed a mathematical language with which we can represent it in several different ways. But that in no way implies the existence of a perfect circle somewhere out there in the universe. However well you can draw a circle, it will never be a perfect circle. It would seem to me that in this instance, the use of the word perfect implies the exact opposite of what it is claimed to do within the ontological argument. None of that really helps me to understand the point behind the immaterial Beethoven’s 9th argument though! Please free to explain it to me in the comments. I suspect it ends up in an argument about human consciousness, as I think all arguments about materialism inevitably do.

So I really look forward to more philosophical discussions, there are lots more things to write about that came out of the panel debate to do with humanism that I may blog about, if only to write down what I should have said at the time but failed to think of on the spot!