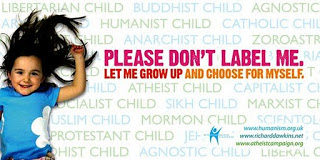 The topic of whether children of atheist parents are atheist themselves is one i have given quite a bit of thought to. It has been quite widely suggested that children are born atheist. In that they do not know of any gods, therefore they are atheist by default. Whilst i agree to some extent, i have always contested that until a child can *decide* what atheist means, it bears no relevance whatsoever and a newborn is simply a child. That’s it. Atheist is a term used to describe a conclusion. Children can’t make that conclusion at birth, or even until much later!. It has neither been prescribed a religion upon birth, nor has it not! (yeah, make grammatical sense of that one! ….. i couldn’t be bothered to try)

One of my children has self identified as an atheist. In class. In front of everyone after she was confronted by a classmate who piped up

My daughter’s decision to swiftly return with

thus proving her point the only way an eight year old could manage, by letting this lad know that nothing in her life felt wrong and therefore, she was not on the wrong path.

I raise my children as freethinkers. I have not once suggested they should be like me or think like me, but i do encourage them to *think*! When they return home from school and recount their day’s RE lesson (without prompting i must add, they seem to enjoy discussing it with me and probe me for alternatives to what they have been taught now that they are getting a bit older) i approach the “moral” or “lesson” from a non-religious perspective and we talk it out together. It usually involves asking them questions like “do you think there are any ways we could do the same thing, without using the bible as a guide?” and they will have a list as long as your arm for me! Another common question i ask them is “do you think that’s a nice way to do things?”. This one has generally been used when discussing Noah’s flood and the crucifixion of Jesus.

I have been tempted on a few occasions to exclude my children from RE at school. I have been asked many times why i don’t. Or, after a rant whether i’ve changed my mind. Believe me, i’ve come very close to it! I have decided, in order to help grow their maturity towards understanding other cultures and rituals, it’s important for my children to attend RE at school. We have spoken about how they can modify their teacher’s words (in their own heads) without disrespecting the teacher or any children so that some of the lessons feel more relevant to them, and they know they don’t have to pray. If the teacher is praying and giving thanks to god for various things, my children have time to reflect and thank the process and/or the people within the process being discussed. For example, the harvest during autumn. When the prayer is thanking god, my children thank the farmers. It’s pretty basic and much more rewarding for them.

The thing that worries me is that, because my children attend a non-denominational christian school, the first example of religion that they have encountered is christianity. This lays the suggestion that christianity is the most important religion, and the rest that they brush over are simply secondary. This is where RE in primary schools is a huge let-down and this leads me towards a different post, something i won’t go into on this one.

Both my elder children (eight and six years old) are quite big on justice. They don’t like unfairness in any form and have been quick to understand (thanks to many science books, the internet, old Cosmos DVDs and the new Cosmos series, David Attenborough documentaries, Deadly 60, Horrible Histories and many other sources) that the world is big, really really big and that some people have less than others. Which isn’t fair. They have both asked me

“mum? if there was a god, he wouldn’t let people starve to death. We would all have the same things”

and questions of a similar thread. This is a question i asked myself at a similar age and started to form similar conclusions to them. Quite simply that what i had been told about god, didn’t fit with what i had learned about the world around me.

So. Are my children atheists? One is, because she has made the distinction herself. The second. No. She won’t be until *she* says so. The third. No. She’s three years old, and whilst she’s a child of atheist parents, she’s far to young to even need to concern herself of the need for gods or lack thereof.