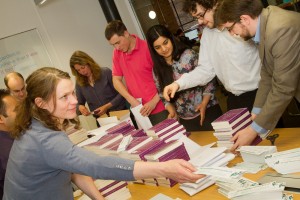 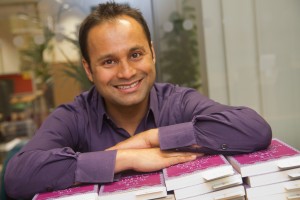 Every secondary school in Swindon is being sent a copy of The Young Atheist’s Handbook: Lessons for Living a Good Life without God today, as part of a national campaign led by the British Humanist Association (BHA) and supported by Swindon Humanists.

Funded entirely from donations by thousands of people from all around the country, the initiative is part of the BHA’s work to ensure that young people have access to resources that enable them to come to their own decisions about their values and beliefs. The book was written by science teacher Alom Shaha and tells the story of his upbringing in a Bangladeshi Muslim community in South East London, how he overcame his inner conflict surrounding his atheism, and the lessons he learnt in leading a good life, full of awe and wonder, based on humanist principles.

As a great source of information for young people on non-religious ways of looking for meaning and purpose in our lives, we are really pleased this book will be available in our local school libraries. It’ll undoubtedly be a great help for students and teachers alike in Swindon.

We know there is plenty of offer already for young people with a religious background in Swindon, but we felt that books from a non-religious perspective, like this one, were sorely lacking from school libraries. In the last Census 31% of people locally said they were not religious, which is higher than the national figure, so we feel it is important those views are fairly represented in the information available in school libraries. We’re very happy to promote this campaign alongside the British Humanist Association at local and national levels as we feel strongly that young people should have access to the full range of beliefs and perspectives available to them in life.

What people have been saying about The Young Atheist’s Handbook:

‘Like many bright and curious children before and since — kind teachers, books, and school provided the young Alom Shaha with a ladder out of inner city poverty and an escape from his abusive, feckless father. But The Young Atheist’s Handbook is no anti-Muslim misery memoir. Rather its strength is the way he explores his life and faith scientifically, through a series of thought experiments. From its taboo busting opening, when, in a simple experiment he eats pork for the first time, Alom Shaha’s rational exploration of the corrosive power of religious indoctrination is refreshingly down to earth, heartfelt and deeply moving. It combines a raw personal story of his Bangladeshi Muslim background with the understated and carefully researched honesty of a scientist seeking the truth, and of a teacher wanting to free young minds. An inspiring and brave book that speaks for thousands who dare not admit their atheism.’ — Samira Ahmed, Journalist and broadcaster (BBC Radio 4, ex-Channel 4 News)

‘A touching personal account that makes for a courageous and compelling read. This is among the most powerful and convincing arguments against religion that I have come across, and it is written in a way that is never patronising or trivialising.’ — Professor Jim Al-Khalili OBE, physicist and broadcaster

‘Not just a scientist and a humanist, Alom is a warm storyteller who, through a series of loose lessons, relates how he discovered that it is possible to live a compassionate, fulfilling, and meaningful life without God or religion. Blending memoir, philosophy, and science, the book is essential reading for all young people.’ — Andrew Copson, Chief Executive of the British Humanist Association

‘This book will make you think and it’s hard to give a greater compliment than that… a deeply personal and sensitively constructed exposition of some of the most enduring philosophical questions… Shaha has constructed a charmingly readable journey through some of the most enduring philosophical territory, weaving memories and thoughtful anecdotes into a powerful story of hope and truth.’ — RE Today

‘This is not a book to argue with – it’s a story to listen to and meditate on…it’s an honest telling of one man’s experience that everyone should read, no matter their theological stripe.’ — Thinking Christian

‘A book that destroys the cliche of the atheist as joyless rationalist and shows the humanity, love, and concern that often lies behind godless thinking.’ — Robin Ince, writer and comedian

‘More than just a great handbook, this is an honest and often very moving story about valuing truth over hope, even in the face of grief.’ — Tim Minchin, comedian

‘Illuminates the route to a better destination for all those who seek what Alom found, namely, that precious liberty of mind which makes its possessor open to all good things.’ — A.C. Grayling, philosopher and author of The Good Book