Talk Yourself Better, with Ariane Sherine

Comedy writer and journalist Ariane Sherine, the creator of the Atheist Bus Campaign, talks about mental health and therapy.

This is a very personal talk which features the Atheist Bus Campaign, the hate mail she received from religious people as a result, her subsequent nervous breakdown and how she recovered. 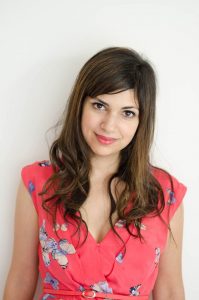 Ariane Sherine has written extensively for The Guardian, and has also written for The Sunday Times, The Independent, The Observer, The Independent on Sunday, The Daily Telegraph, The Spectator, New Statesman and New Humanist. She regularly appears on television and radio.

Ariane has written for the television programmes My Family (BBC1), Countdown (Channel 4), Two Pints of Lager and a Packet of Crisps (BBC2/BBC3), The Story of Tracy Beaker (BBC1), The New Worst Witch (ITV) and Space Pirates (BBC1).

She created the hugely successful Atheist Bus Campaign - the adverts on buses which proclaimed 'There's probably no God. Now stop worrying and enjoy your life.' The campaign went global, running in 13 countries around the world, including in the US, Canada, Germany and New Zealand. She went on to edit and compile the bestselling celebrity book The Atheist's Guide to Christmas (HarperCollins).

A note on the venue: we'll be in the Court Room of the Goddard Arms for this event. This is upstairs, with no lift available.

Want us to let you know about new upcoming events? Subscribe

7 people are attending Talk Yourself Better, with Ariane Sherine